5. Slowing down the ageing process and interpersonal relationships
5.1. Social isolation
Social isolation means not participating in social life, not maintaining social and institutional ties. The question of whether social isolation has an impact on increasing the risk of mortality has already been investigated, but the research carried out has produced contradictory results, was too small in scale or did not distinguish between the results adequately according to gender. In order to obtain an unambiguous answer, it was decided to analyse the data obtained from the Third National Healthand Nutrition Examination Survey and the Nutrition Examination Survey (NHANES III) and the National Death Index.

A total of 16,849 adults aged 17-89 years were analysed. The observation lasted from 1 month up to 18 years and the median was 14 years. Participants were asked to answer questions about their marital status, whether they live alone, how often they contact others and whether they participate in club, organizational or religious activities. 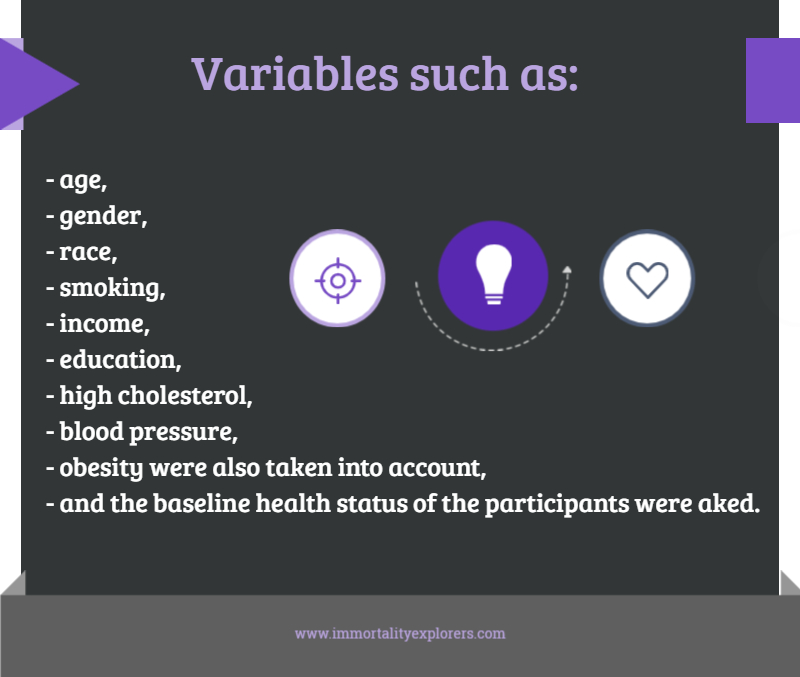 According to the findings, the most isolated people in society were much more likely to smoke cigarettes than those maintaining relationships. Isolation among men was directly related to factors such as not participating in club associations, not participating in any religious activities and being unmarried. As for women, such factors included lack of religious activities and being unmarried, but also lack of interaction with family and friends. In the case of women who were considered to be the most isolated, above-average cholesterol and blood pressure levels were noted, and obesity was much less prevalent in the case of men from the same group.
The analysis showed a clear link between isolation and mortality - in the case of both sexes, social isolation resulted in shorter lives.
As it turned out, the greater the degree of isolation, the more the risk of premature death increased. In addition, it was noted that the risk of mortality from social isolation for women was comparable in size to that from increased blood pressure or smoking.[1]
5.2. Social integration and support
The main focus of the prospective cohort study conducted on the basis of the US National Health Interview Survey (NHIS) in 2001 was to check whether there is a direct correlation between social integration and chronic diseases such as cancer, CVD and others and the risk of all-cause mortality. The aim was also to establish a link with other diseases much less frequently considered in previous studies, such as Alzheimer’s disease, diabetes and chronic lower respiratory diseases (CLRD). It has already been proven that people who put more emphasis on social relationships live longer than those who avoid contact, but the mechanisms behind this were not clearly defined.

A total of 29,179 adults participated in the sample. The observation of the respondents lasted over 15 years. The participants were asked to answer questions about whether they need emotional and social support and how often they can count on such support. The respondents were also asked about their participation in religious organizations, taking part in group activities, they were asked to evaluate their contacts with friends and family both over the phone and in person, and asked about their marital status. 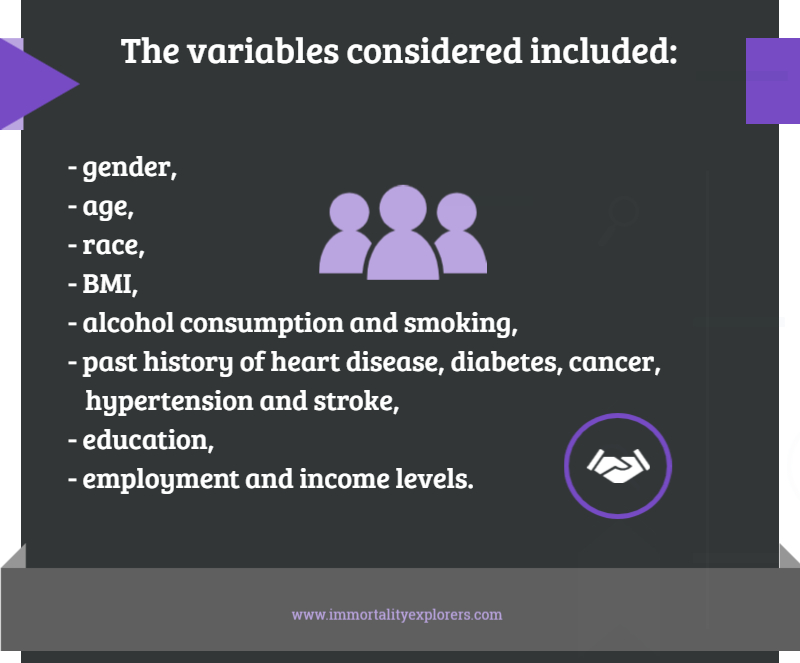 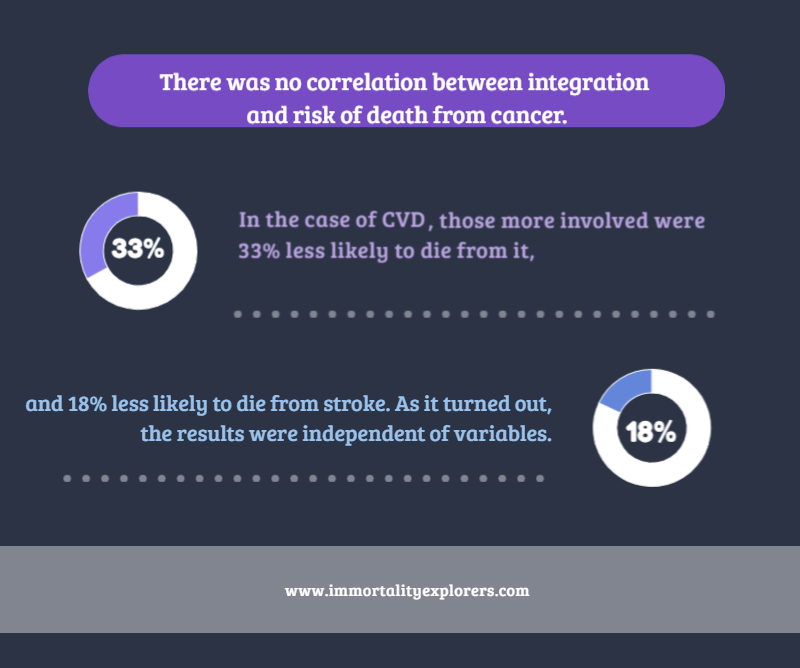 5.3. Online social integration
Since it is already known that people who are more socially engaged have a better chance of longevity, can we say the same about people who maintain strong social networks through online social networking? This is a particularly important question given how many people use this form of communication. In order to determine whether online friendships are beneficial or effective and comparable to those held offline, it was decided to compare the 12 million people who use Facebook with those who do not have a Facebook account. The analysis used public Californian data on the lives of people on the Californian electoral register, who are also Facebook users. Their health results were compared with people who do not use Facebook. The activity of people using Facebook was also observed.

The research on social network activity of people using Facebook brought interesting results. It turned out that people who regularly uploaded large numbers of photos but had few text statuses had a 30% lower mortality risk. This is probably due to the fact that this type of online activity can also be associated with offline activity. People who were more socially engaged outside the Internet were also more active on social networking sites. In addition, it appears that the number of markings on the pictures is not without significance.
The lowest risk of mortality has been observed for people who are marked in many of the pictures and their overall level of communication via Facebook is rather moderate.
However, both the very low and very high level of contact with others exclusively via the Internet increases the risk of mortality. It was also decided to investigate the link between requests for friendship and the risk of death. It was found that not only does such a correlation exist, but the risk of death is lower by about 66% in people who accept many requests for friendship. However, there was no correlation between mortality and the number of requests sent. 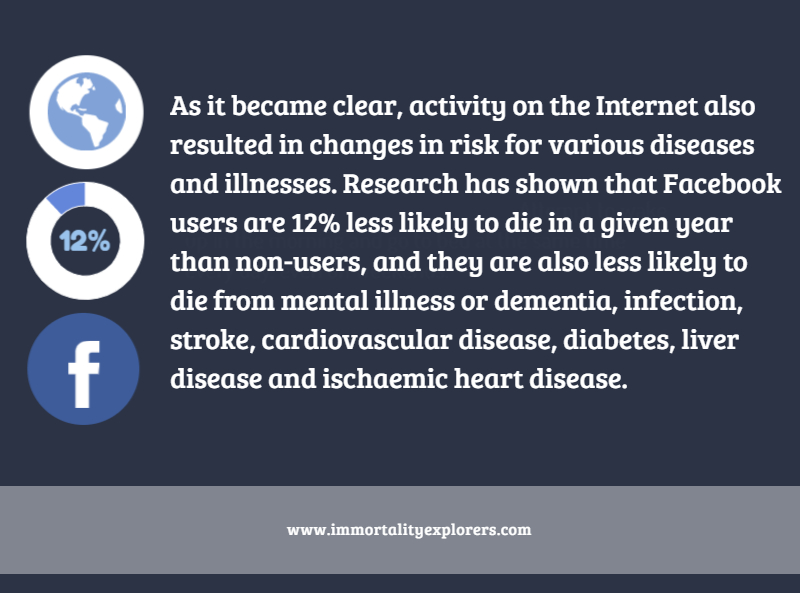 However, the risk of cancer mortality, suicide, sexually transmitted diseases, drug overdoses and unintentional injuries did not differ significantly between the two groups.
It was noted that many of the diseases under consideration are influenced by the number of images uploaded to Facebook - a high level of activity in this case was associated with a reduced risk of mortality for almost every disease studied except suicide.
The situation is similar with status updates, but they do not in any way affect the risk associated with both suicide and drug overdose. Messaging through messaging did not affect any mortality risk, while receiving messages reduced the risk of suicide death and drug overdose, but increased the risk for cancer. The strongest link to the reduction in the risk of mortality from all the investigated causes was shown by the marking on the pictures, which strongly reduced the risk of mortality for all the investigated causes except for cancer.[3]
[1] Pantell, M., Rehkopf, D., Jutte, D., Syme, L., Balmes, J., Adler, N. 2013: ‘Social Isolation: A Predictor of Mortality Comparable to Traditional Clinical Risk Factors’, American Journal of Public Health 103, 2056_2062