4.Slowing down the ageing process and sleep
4.1.Sleep duration
Participants in the Epidemiologic Follow-up Studies of the NHANES I were observed between 1982 and 1992 to determine whether there is a link between mortality risk and sleep duration. The subjects were observed for 8 to 10 years.
The researchers decided to investigate the relationship between sleep, body weight, diabetes and hypertension, and how many people from different age ranges sleep.
The study consisted of three waves in total. The first wave took place in 1986 and included people aged 55-74 and their basic research, while the other two waves from 1987 and 1992 included all medically examined people aged 25-74. Variables such as gender, age, race, weight, physical activity, smoking, general health, history of cancer, diabetes, hypertension, depression or the presence of its symptoms, earnings, education, living alone, taking sleeping pills, being sleepy during the day or restless night sleep were taken into account. 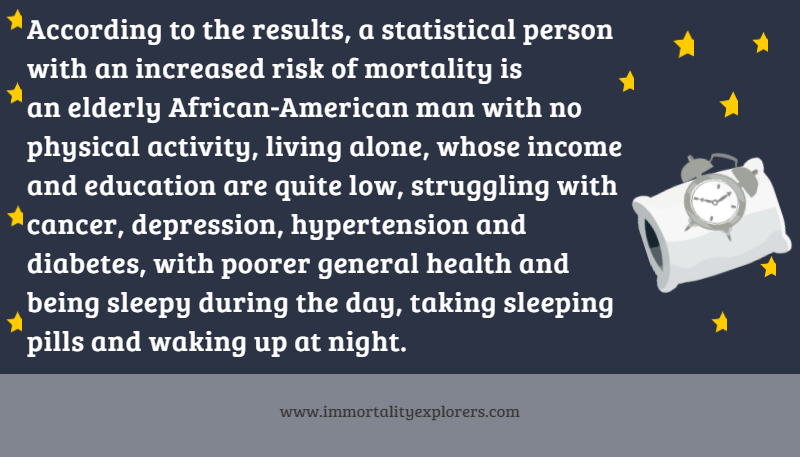 As it turned out, there was a U-shaped relationship between mortality and sleep time. Both those who sleep 5 hours or less at night and those who sleep 9 hours or more had an increased risk of mortality.
In particular, persons aged 60-86 years and over who slept less or more than the recommended 7-8 hours at night were particularly at risk of death compared to those who slept regularly for 7 hours. For the younger group of people aged 32-59, no such relationship was found.[1]
4.2. Napping
Since it has been proven that a sleep that is both too short and too long, and therefore one that does not fit within 7-8 hours, is harmful and increases the risk of mortality, it was decided to go one step further.
In many Mediterranean regions, the so-called siesta is practised, which simply means taking a nap during the day.
It is designed to relax and distract from everyday problems, but the results of sleep quantity research have led to questions about its positive effects on health. In particular, it is of concern that sleepiness can occur when taking a nap during the day, which has been repeatedly described as one of the earliest signs of increased risk associated with various health problems. In 1998, the cohort study European Prospective Investigation Into Cancer (EPIC)-Norfolk on people from the UK population was launched to check whether daytime naps are associated with an increased risk of mortality from all and different causes.

The study involved 16 374 people aged between 40 and 79 years. They were asked whether they happen to take a nap during the day. If the person answered in the affirmative, they then had to determine how long it usually takes to nap. 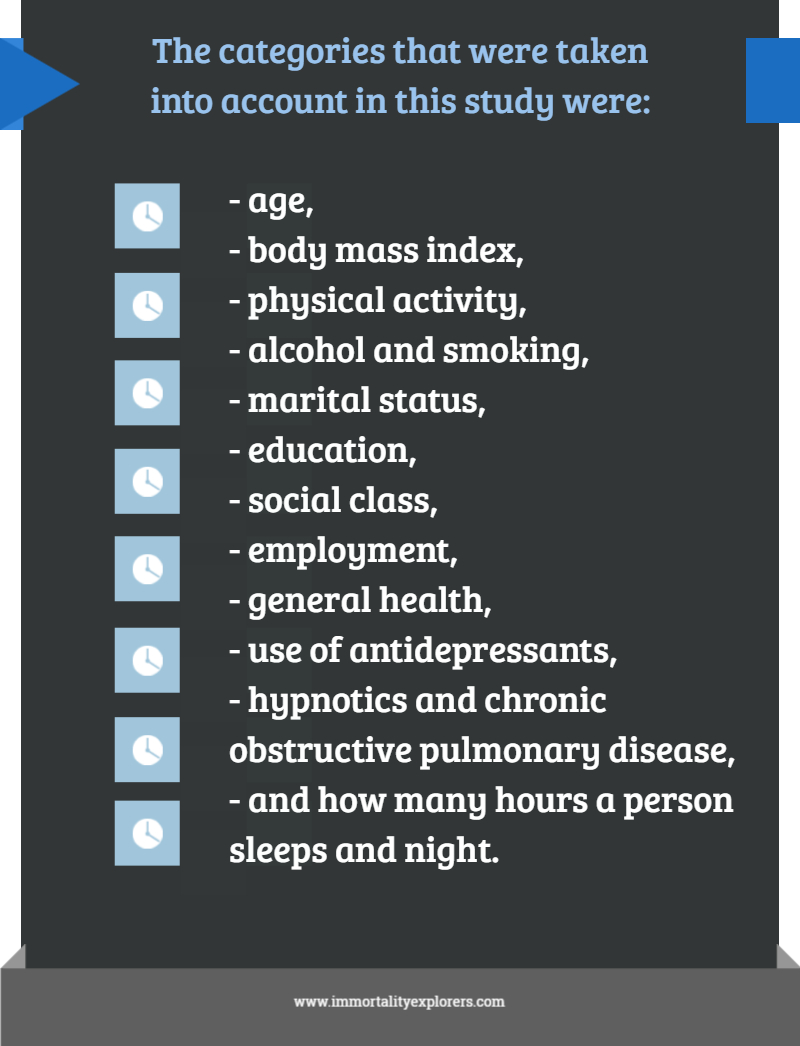 It turned out that 37% of men and 24.2% of women among the respondents sleep during the day. Of all those who declared to take a nap, only 10% slept more than 1 hour a day. The most likely to take a nap were non-working men with low physical activity, low education, higher BMI and poor general health performance. They were also on average 6 years older than those who claimed not to take a nap. These relationships were particularly strong for snoozes over an hour.
People who declared to take a nap for less than 1 hour a day were 22% more likely to die from all causes, and those who slept an hour or more were 54% more likely.
As it has been found, the health of the respondents had a marginal impact on these results. After analyzing the results, it became clear that taking a nap during the day is more dangerous for young people with a fairly low BMI, while no significant relationships were found with regard to gender, health conditions, smoking or sleeping time at night.[2]
4.3. Sleep disturbances
Nowadays, a large number of people not only sleep too little, but also the quality of their sleep is poor. The overwhelming amount of research on sleep and its impact on the risk of death focuses exclusively on its length, not taking into account the fact that its quality may also have an impact on mortality. In a situation where inability to sleep, lack of sleep and changes in its quality affect a large part of the population, it is worth taking a closer look at this issue.
It has already been proven that too little sleep significantly affects metabolism, endocrinology, immunology and the risk of various diseases.
It is suspected that poor sleep quality may further increase this risk. In fact, several studies conducted in the past have already investigated this occurrence, but the results were unclear and contradictory.

The GAZEL cohort study decided to observe 20,625 people to determine whether sleep disorders have an increased risk of all-cause mortality and for specific reasons. In addition, it was decided to determine whether sleep disorders are associated with other factors known to date to increase mortality rates. Respondents were aged between 35 and 50 years and were examined for a total of 19 years. 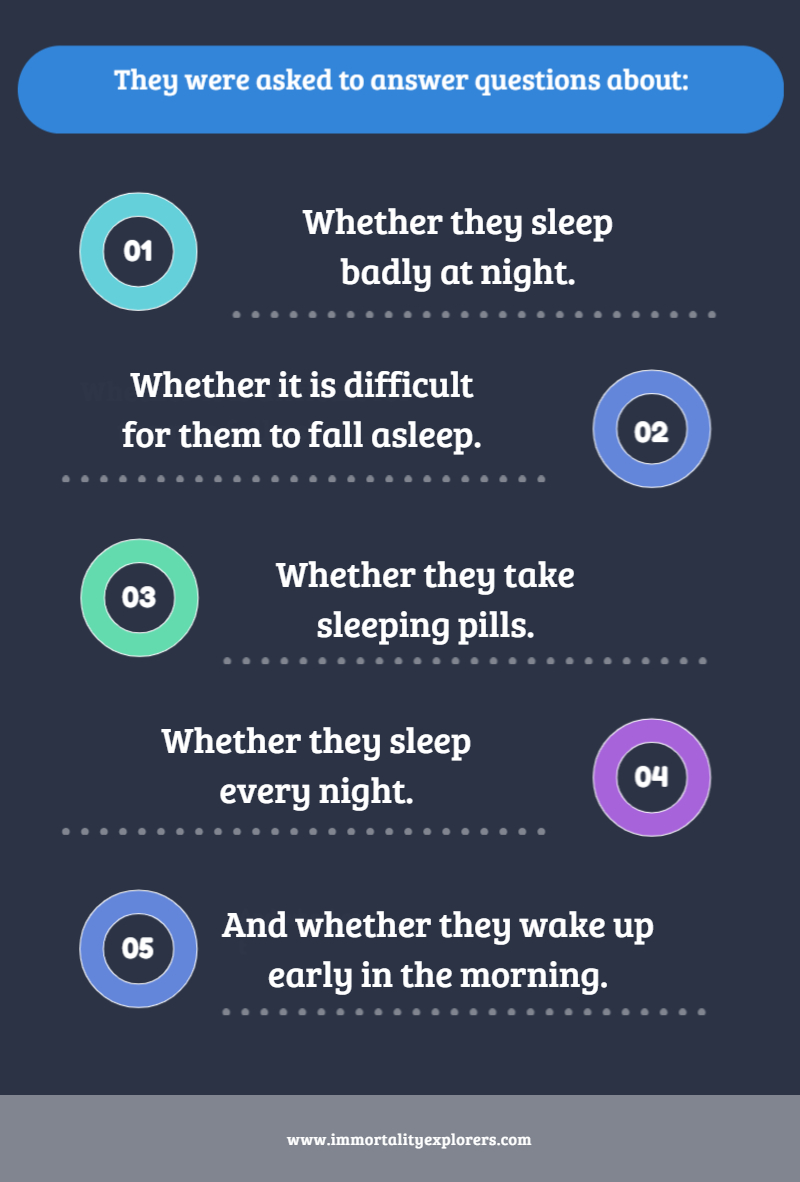 The covarians considered were age, BMI, marital status, alcohol consumption, socioeconomic status, chronic illness, and whether the person is working at night.
Among the respondents, 14% reported more than 2 sleep disorders, while 58% did not. As it appeared, men who declared bad sleep at night, taking sleeping pills to help them fall asleep, and who had problems sleeping most of the night, were exposed to death prematurely. Men under 45 years of age were expected to have an increased risk of dying because of almost every item mentioned, except sleeping pills, but in the case of older men only bad night sleep contributed to the increased risk. 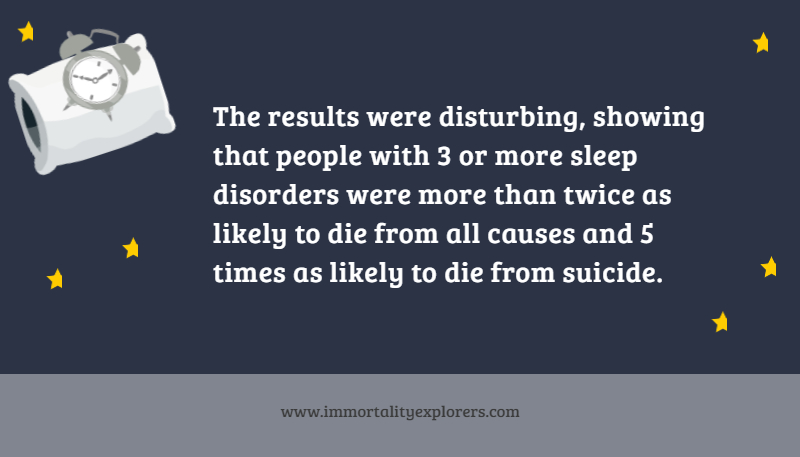 In terms of the link between the quality of sleep and the diseases, there was an increased risk of cancer-related deaths for men who suffered from bad night sleep or could not sleep for most of it.
As it turned out, although no direct link was found between BMI and the sleep disorders, it was noted that people of both sexes who complained about sleep problems tended to weight slightly more than people who did not have such problems.
In contrast, men taking sleeping pills weighed relatively less than those who did not. As it was found, sleeping pills not only affected weight, but also increased the risk of hypertension amongst both sexes. Moreover, if the person taking the tablets had a problem with bad night sleep, the risk of diabetes was also higher. Women who admitted to having 3 or more sleep disorders had an increased risk of hypertension by up to 50% compared to women who slept well, and in case of problems with sleeping and lying awake the risk of diabetes also went up.[3]
[1] Gangwisch, J., Heymsfield, S., Boden-Albala, B., Buijs, R., Kreier, F., Opler, M., Pickering, T., Rundle, A., Zammit, G., and Malaspina D. ‘Sleep Duration Associated with Mortality in Elderly, but not Middle-Aged, Adults in a Large US Sample’, Sleep. 2008 Aug 1; 31(8): 1087–1096