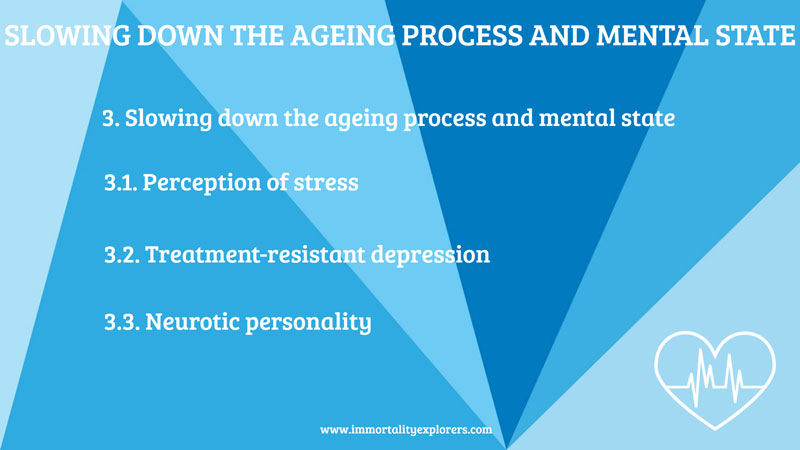 3. Slowing down the ageing process and mental state
3.1. Perception of stress
Stress has a number of negative consequences for human health, including making one more vulnerable to colds and cardiovascular diseases. However, less is known about its direct impact on mortality in general. In addition, the overwhelming number of studies dealing with stress and related complications have focused on the impact of stressful events on mortality, but not enough attention has been paid to the impact of the very perception of stress on death.

A study on elderly people from Taiwan was designed to test this relationship. Data from the Taiwan Longitudinal Ageing Study (TLSA) were analysed. A total of 4440 people were observed, of whom 864 died by 2010. The rest were observed for 11.8 years. The subjects were aged 53 to 93 years. 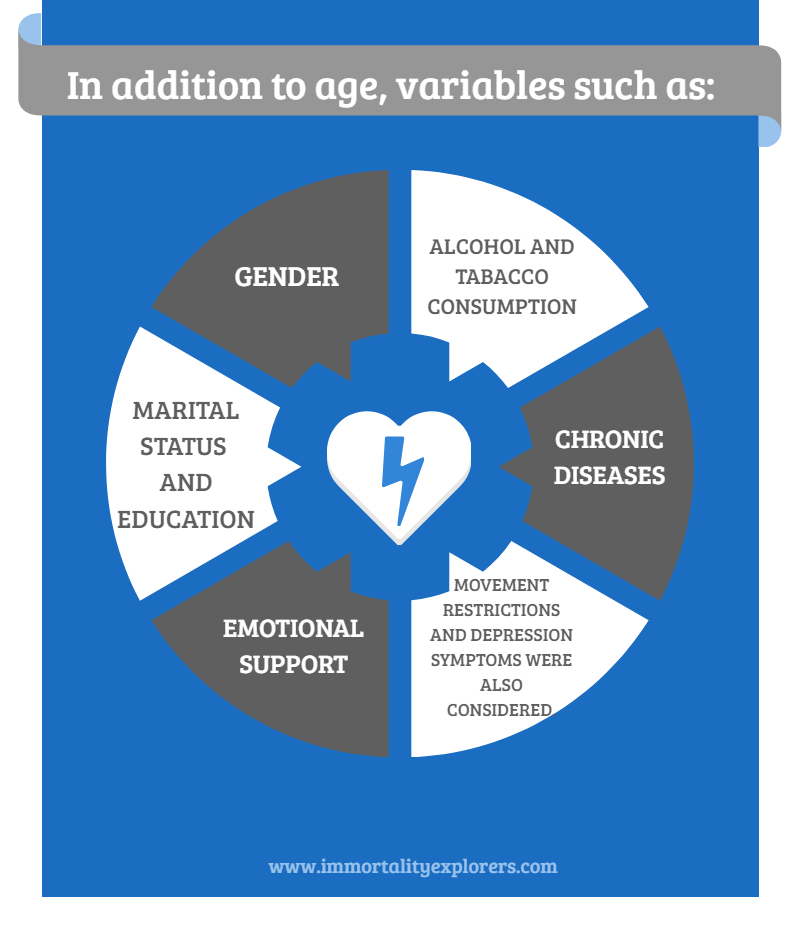 The respondents had to assess on their own whether the situation caused them feelings of anxiety or pressure. The examined situations included their financial situation, health, work, marriage, both their own and close family members’, relationships with other family members and other situations not mentioned.
According to the results of the study, a lower level of stress was recorded for men than women, and for married people.
The risk of mortality for all causes was found to be increased by 19% for those who experienced an increased level of perceived stress.
In particular, respondents who indicated their perceived health situation as very stressful were in a group with an increased risk of death. However, the level of perceived stress had no impact on mortality related to cardiovascular diseases. Also, the occurrence of depressive symptoms, motor restrictions and chronic diseases in the studied subjects was associated with a higher risk of death, but not when associated with stress. The level of perceived stress was not dependent on and did not differ significantly with respect to the gender of the respondents.[1]
3.2. Treatment-resistant depression
Depression is one of the main causes of suicide, but its impact on overall mortality risk is quite unclear. It is known that people with depression are also more likely to face oxidative stress, pathophysiological changes, cardiovascular diseases and peripheral inflammation, which in turn can lead to somatic diseases that make the risk of mortality much higher. In addition, people suffering from depression are more likely to smoke, lack of physical activity, unhealthy diets and unwillingness to take up treatment, which also affects mortality.
Depression itself can be an independent factor that increases the risk of mortality if a person with depression also has chronic diseases. It is estimated that about 60% of depressed people may face treatment-resistant depression, which is largely responsible for the occurrence of serious depressive disorders.
Based on data obtained from Optum Clinformatics™ Extended, it was decided to assess the risk of mortality from all causes associated with treatment-resistant depression and to compare it with people with severe depressive disorders who do not suffer from treatment-resistant depression. The study involved 355,942 patients over the age of 18 years who were treated pharmacologically with severe depressive disorder and were observed for 6 months.

Of the subjects surveyed, 34 176 also suffered from treatment-resistant depression, and the risk of mortality from all causes was greater in their case than in those with untreated severe depressive disorders without symptoms of treatment-resistant depression.
Individuals with severe depressive disorders also have an increased risk of premature death, but this is not related to all causes, but rather to chronic physical health problems and a higher probability of suicide.
According to research, it is precisely patients with treatment-resistant depression that significantly increase the mortality rate among people with severe depressive disorders.[2]
3.3. Neurotic personality
Up to now, studies on neurotic personality traits and their relationship to the risk of death from various causes have produced very different results and have not provided a concrete answer to this issue. Neither has special attention been paid to age, which, however, is very important in this case, as the elderly may develop depressive or anxiety-related traits that result from health problems and are not necessarily a predictive factor. In view of the uncertainties that exist on this subject, the Mayo Clinic Cohort Study of Personality and Aging organized a study to establish the actual link between mortality from all causes and depressive, pessimistic and anxious neurotic characteristics. 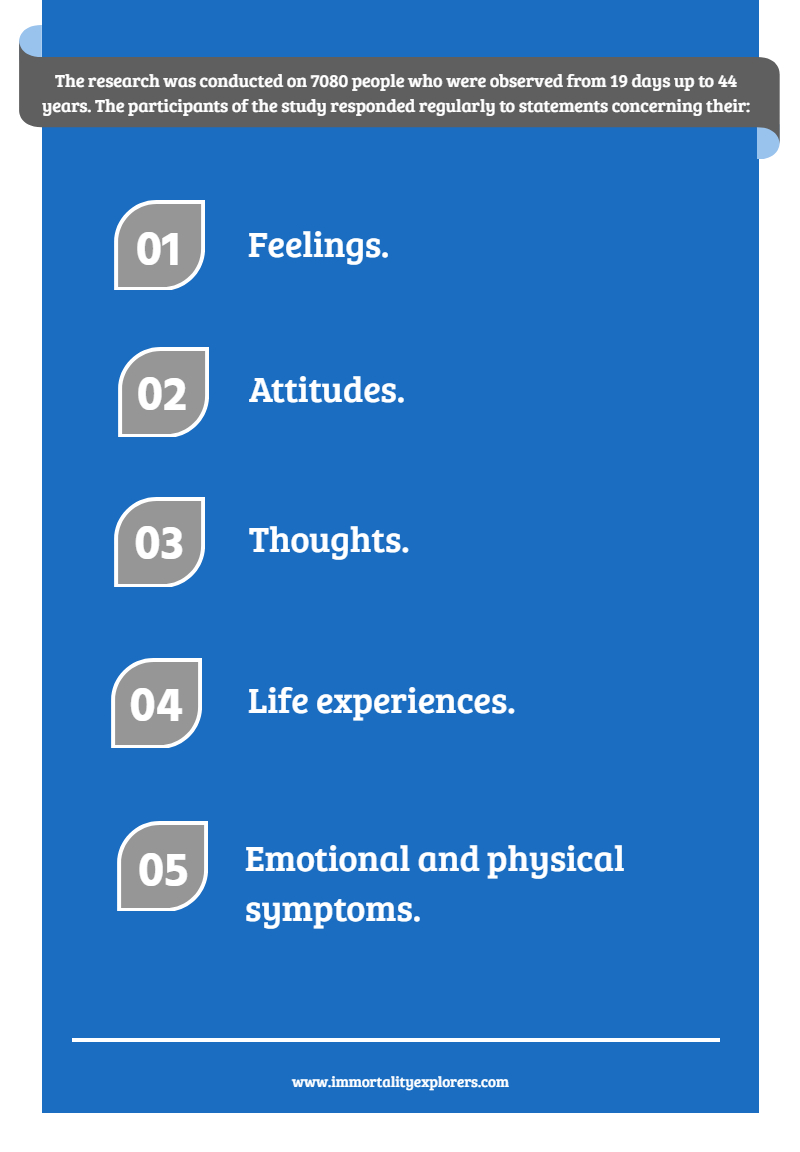 Among the variables taken into account were alcohol consumption, education and self-assessment of general health.
People who were found to be depressed for fear of the influence of possible depressive states on the results associated with anxiety and pessimism were excluded from the study.
The results were unambiguous - depressive, pessimistic and anxious personality traits associated with neurotic personality were directly associated with an increased risk of mortality from all causes.
Very similar results were recorded for both women and men, and it proved that gender was not significant in this case. Importantly, these characteristics lead to increased mortality not only for the elderly, but also for the young, as it turned out, are at risk of being adversely affected in terms of reduced life expectancy.
Individuals aged 20-39 with pessimistic personality traits had a particularly high risk of mortality, while those with depressive and anxiety-related traits were equally prone to death regardless of their age.
Overall, neurotic personality is inevitably associated with the risk of premature death.[3]
[1] Vasunilashorn, S., Glei, D., Weinstein, M., Goldman, N. ‘Perceived Stress and Mortality in a Taiwanese Older Adult Population’, The International Journal on the Biology of Stress, Volume 16, 2013 - Issue 6, pp. 600-606M